I am pleased to announce the introduction of a "Words Known" and "Words known by level" summary for logged in users: 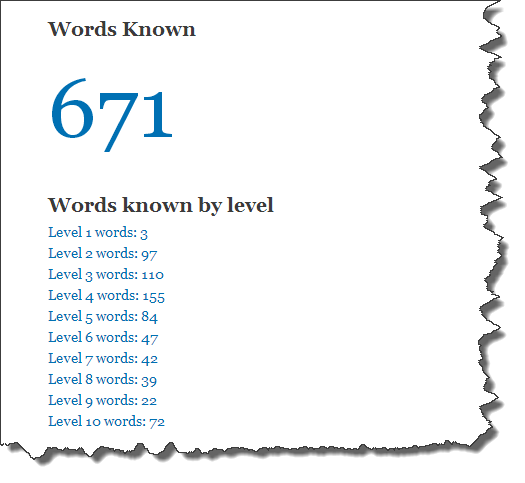 As you can see, this shows the total number of Thai words which are "known" to you (in fact the image above shows my current Thai progress). Of course, people sometimes ask how many words you "know" in Thai (or in a particular language), but knowing words in a foreign language is not a binary, on/off, sort of thing. It's not that you either know a word or you don't. Knowing a word is a continum, between 0% and 100%, with every step in between. As Lingopolo tries to make clear, knowing a word goes gradually between the two end points: first the word becomes known at a basic level (Level 1), and then gradually you get to know the word better and better until it reaches Level 10. By that stage, you should know the word really very well.

In fact, I like to think of learning vocabulary rather like getting to know people. A person is not a stranger, and then suddenly you know them deeply. A person takes time to get to know, and the longer you know a person the more you know them. Words in Thai (or any language) are no different; there is the initial contact with a word (like meeting someone for the first time), and then there is the time when you hear a word and know that you have heard it before (like when you meet someone and you know you met but have forgotten their name), and then later there is the time when you know a word pretty well (like friends which you only have to think a little to recall their names), and eventually you get to the point with a word where you know it almost as well as your mother tongue.

When you click on the large number, you will see a complete list of all your known words, sorted by the Level of the words: 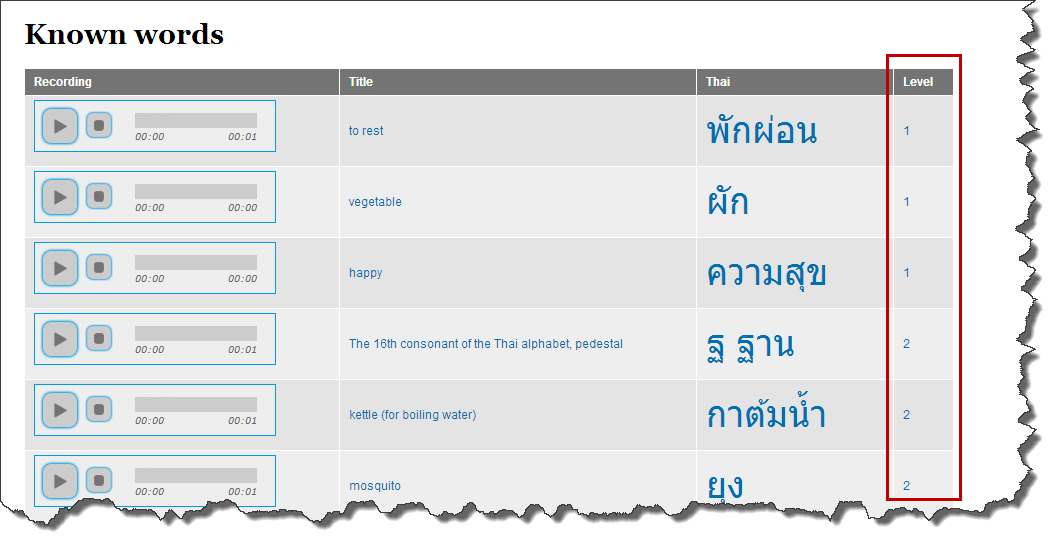 Finally, if you click on a number in the Level column, you will see a list of the words just for that level, e.g. for Level 1:

I hope you enjoy this new feature and that it encourages you to learn more and more words and to get to known each word more and more, pushing each word higher and higher in the Lingopolo levels.